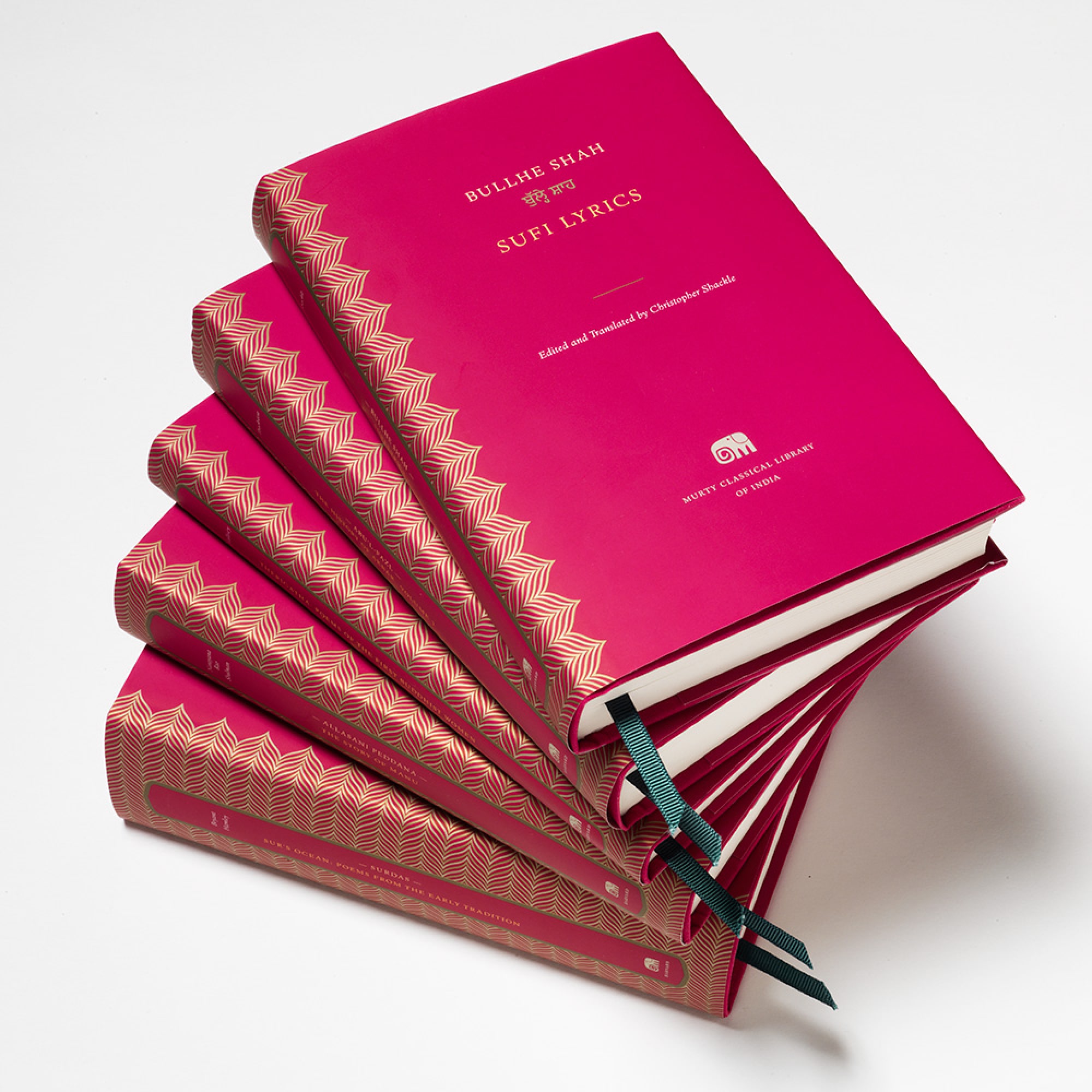 The series logo and jacket design were selected in an international design competition. The winning concept by Andrea A. Stranger was chosen for its grace, spirit, and timelessness. The elephant as a symbol has historic significance in both Indian and Western cultures. The pattern and the vibrant palette is characteristic of South Asia and complements the elegant Western typography.

Murty Classical Library of India volumes are designed by Rathna Ramanathan and Guglielmo Rossi of M9Design. The design is based on research on the history of the Indic book, including palm leaf and birch-bark manuscripts and early printed books. Inspired by polyphonic classical music, the layout highlights the unique nature of each classical text while adjusting to the needs of each Indic script. Following the intellectual mission of facing-page translations, the page spread is designed so text and translation reflect each other rather than allowing one to decide the other’s fate. The series design is based on the idea of “unity in diversity,” celebrating the individuality of each language while bringing them together within a single, cohesive visual identity.

Bangla text is set in the Murty Bangla typeface, commissioned by Harvard University Press and designed by John Hudson and Fiona Ross of Tiro Typeworks. The design follows the manuscript tradition of letterform construction reintroduced to typography by Linotype Bengali in the late 1970s, but in a less condensed form with lower stroke contrast. Its proportions and overall texture are closer to those of metal types previously employed by the leading Kolkata publishing house, Ananda Bazar Patrika. The design of Murty Bangla is intended to provide excellent readability to the informed scholar and the contemporary younger reader alike.

Hindi text is set in the Murty Hindi typeface, specially commissioned for the purpose by Harvard University Press and designed by John Hudson and Fiona Ross of Tiro Typeworks. The proportions and styling of the characters are in keeping with the typographic tradition established by the renowned Nirnaya Sagar Press, yet with a deliberate reduction of the typically high degree of stroke modulation. The result is a robust, modern design with clean lines and generously proportioned counters, which ensures optimum readability at both text and footnote sizes.

Kannada text is set in the Murty Kannada typeface, commissioned by Harvard University Press and designed by John Hudson and Fiona Ross of Tiro Typeworks. The design takes inspiration from a range of sources—the crisp, open counters of the eighteenth-century types of the renowned Basel Mission Press; the styling of ligatures in the 1930s Kannada types offered by the Gujarat Type Foundry; and the dynamic stroke angles of unattributed types found in a twentieth-century Kannada Reader. Murty Kannada avoids the extreme high-contrast style of earlier designs and adheres to contemporary patterns of Kannada stroke modulation to ensure good readability for all sizes.

Panjabi text is set in the Murty Gurmukhi typeface, specially commissioned for the purpose by Harvard University Press and designed by John Hudson and Fiona Ross of Tiro Typeworks. This original design reintroduces traditional stroke modulation patterns that are apparent in manuscript letterforms but which have been lacking in conventional Panjabi typography to date. The design consciously recalls forms found in the manuscript Prayer Book of Rani Jindan (British Library Panjabi MS D4).

Persian text is set in Nassim, an award-winning typeface designed by Titus Nemeth of TN Typography that has proven its versatility in complex typographic situations and has become particularly popular for Persian language setting. Fitting to its use in a new edition of classical literature, the type’s contemporary design is combined with elements derived from Islamic manuscript practice to make for a pleasant reading experience with sophistication in the details.

Sanskrit text is set in the Murty Sanskrit typeface, specially commissioned for the purpose by Harvard University Press and designed by John Hudson and Fiona Ross of Tiro Typeworks. The proportions and styling of the characters are in keeping with the typographic tradition established by the renowned Nirnaya Sagar Press, yet with a deliberate reduction of the typically high degree of stroke modulation. The result is a robust, modern typeface that includes Sanskrit-specific type forms and conjuncts.

Telugu text is set in the Murty Telugu typeface, specially commissioned for the purpose by Harvard University Press and designed by John Hudson and Fiona Ross of Tiro Typeworks. The type is inspired by those of the Swatantra Type Foundry in the shaping of the counters and the relatively high degree of stroke modulation for Telugu letterforms. Following the manuscript tradition, subscript letters are larger than in many fonts, making them more legible in text. 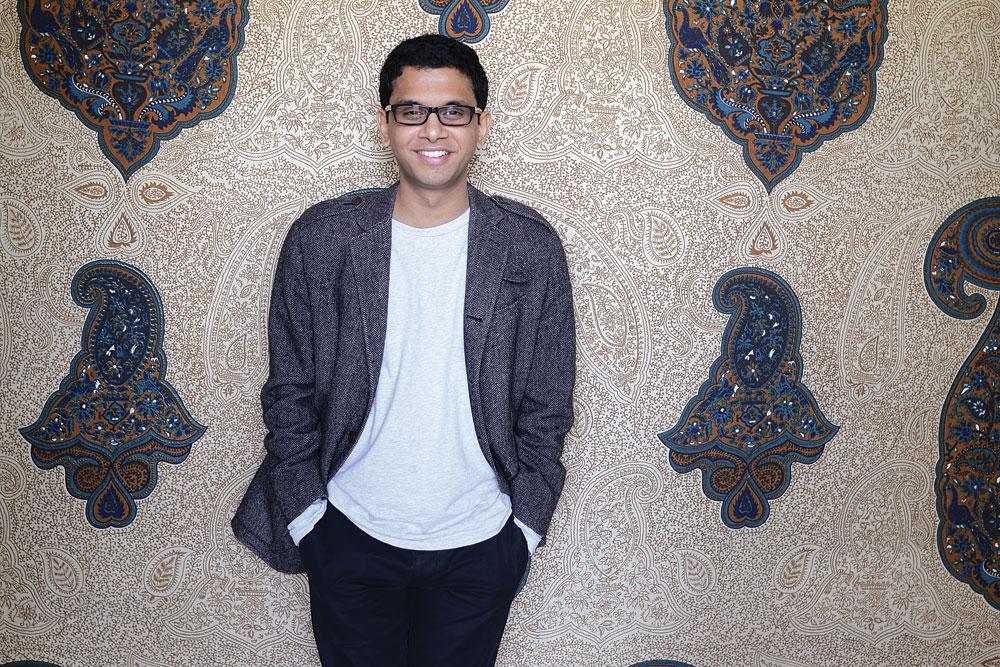 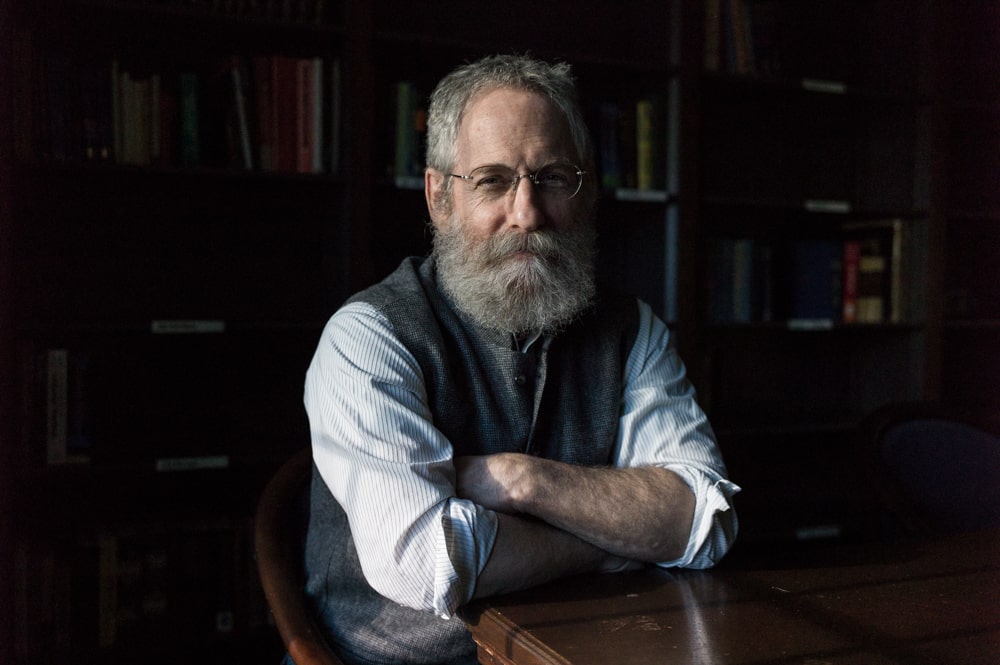 Sheldon Pollock is the Founding General Editor of the Murty Classical Library series published by Harvard University Press. He is the Arvind Raghunathan Professor emeritus of South Asian Studies at Columbia University. From 2005–2011, he served as the William B. Ransford Professor of Sanskrit and Indian Studies at Columbia, and before that as the George V. Bobrinskoy Distinguished Service Professor of Sanskrit and Indic Studies at the University of Chicago, where he taught from 1989–2005. He was educated at Harvard University, receiving his undergraduate degree in Classics (Greek) magna cum laude in 1971, before earning an A.M. (1973) and Ph.D. (1975) in Sanskrit and Indian Studies. His areas of specialization are Sanskrit philology and Indian and comparative intellectual and literary history.

His publications include the award-winning The Language of the Gods in the World of Men: Sanskrit, Culture, and Power in Premodern India. Pollock was General Editor of the Clay Sanskrit Library, for which he also edited and translated several volumes, and founder and joint editor of “South Asia across the Disciplines,” a collaborative venture of the university presses of California, Chicago, and Columbia. He also edits “Historical Sourcebooks in Classical Indian Thought,” to which he contributed A Rasa Reader. He has supervised more than two dozen doctoral dissertations, and his former students hold appointments in philology, history, religion, and comparative literature, at major centers of South Asian Studies worldwide. In 2008, Pollock received the Distinguished Achievement Award from the Andrew W. Mellon Foundation for significant contributions to humanistic inquiry, and in 2009, the President's Award for Sanskrit, from the Government of India. The following year the Padma Shri, the fourth highest civilian award in India, was conferred upon him. He is the first American to be so honored for academic accomplishment.

In 2014, he was elected a fellow of the American Academy of Arts and Sciences, and in 2020, a Corresponding Fellow of the British Academy.

Read Professor Pollock’s introduction to the series, “Why a Classical Library of India?”

‘The History of Akbar’ Review: Enlightening Tales of His Imperial Self

A fabled Muslim ruler, though not immune to shameless flattery, encouraged religious debate.

This translation of one of the oldest surviving literatures written by some of the first Buddhist women — or Theris — recount their lives pre-ordination and their joy in liberation.

Press
The Wall Street Journal
‘The History of Akbar’ Review: Enlightening Tales of His Imperial Self

Review of Poems of the First Buddhist Women: A Translation of the Therigatha, translated by Charles Hallisey

Excerpted from Poems of the First Buddhist Women: A Translation of the Therigatha, translated by Charles Hallisey

Press
EdexLive (The New Indian Express Group)
Read into this: Why Rohan Murty won’t let you borrow books from his personal library

Media
Bangalore International Centre
Watch "The Life of Harishchandra: A Story in Song"

Interview with Vanamala Viswanatha, translator of Raghavanka’s The Life of Harishchandra